The Incredible History of the Pallet 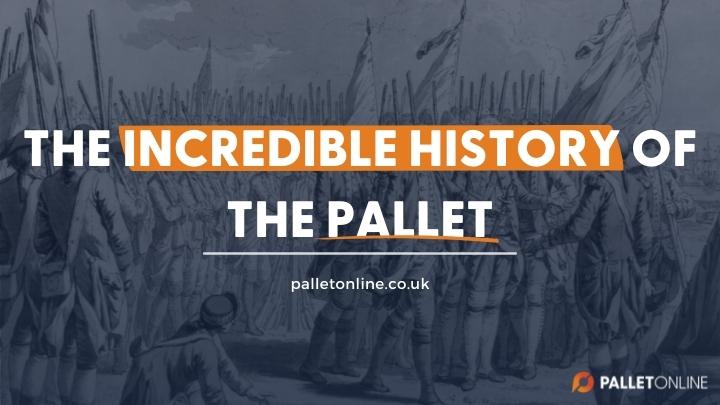 Ahh, the humble pallet. We take them for granted, but do you actually know the history behind these wonderful wooden structures?

The pallet as we know it today has been around for roughly a century. That's right, an entire century of stacking, wrapping and packing… and we could never imagine logistics without them.

However, did you know that the pallet wasn't the first of its kind? It does, in fact, have a precursor: the skid.

Nowadays, a skid and a pallet are often used interchangeably, but before the birth of the pallet, skids were flat, wooden structures (like pallets), but there was no bottom layer, so they stood on three wooden beams, just like this: 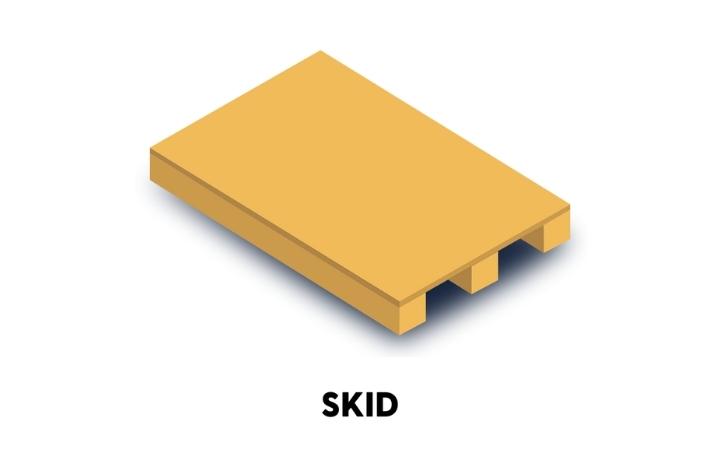 Believe it or not, skids actually date back to Ancient Egyptian times!

But, the pallet we know and love today was invented by George Raymond and patented in 1925 by Howard T. Hallowell, but we'll get onto that later.

Fun fact: the original name for pallet was a "lift truck platform"

What are pallets used for?

Put simply, pallets are used for transporting bulk goods from A to B.

Imagine walking into a large warehouse or industrial estate. You'll likely see a few pallets scattered around. They might look a bit useless, or even a bit of an eyesore! But they actually form a massive part of logistics. 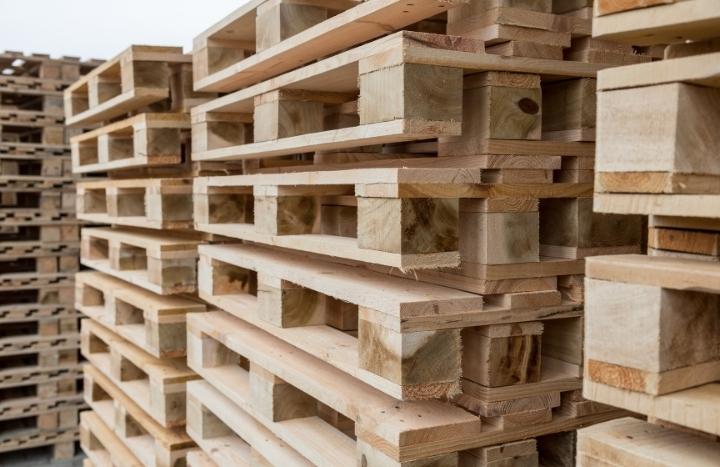 A pallet is a flat wooden structure, usually made of multiple wooden beams to create a strong platform to carry goods.

They might not seem it, but they're pretty strong. Did you know that a standard wooden pallet can withstand around 2 tonnes of weight? To put that into perspective, that’s strong enough to hold the weight of 20 baby elephants!

You can put a whole lot on a pallet, including engines, gearboxes, flat-packed furniture and even small vehicles, just to name a few.

How are pallets made?

Most wooden pallets are made from the centre of a tree. Oak is the most common type of wood for pallets as it's very strong and is one of the easiest to obtain, thanks to the abundance of oak trees.

The procedure to make a pallet is pretty much how you'd expect - a bunch of wooden planks are nailed together to form a structure.

Not every pallet is made from wood, though. Plastic pallets are a fairly new addition to the collection and are made from either polypropylene or polyethylene that is moulded into the shape of a regular wooden pallet. 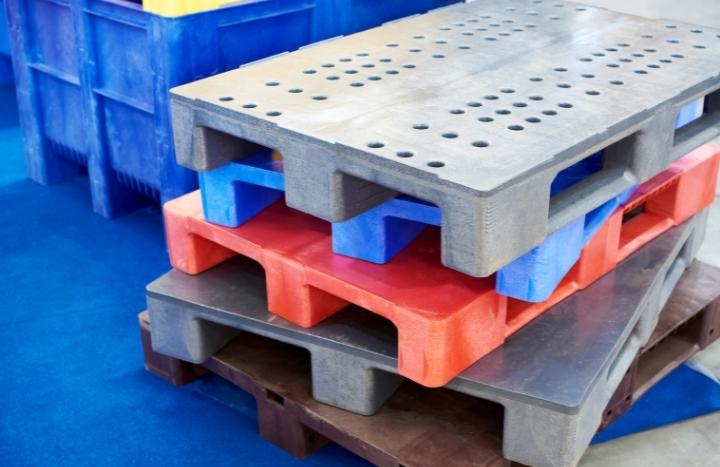 When were pallets first used?

We've already briefly mentioned about the long history of the skid, but what about the pallet?

Well, a pallet was made specifically for a forklift, but they became extremely popular during the World Wars due to the vast amount of materials and weaponry that had to be transported. Pallets were the perfect size and shape for this!

Then, the standard pallet size was born. 48x48 inches was believed to be the perfect fit to load onto railway box cars. But today, the official standard size is a little smaller, measuring 48x40 inches, or 1.2x1.0 metres.

Why is it called a pallet?

While a palate, pallette and pallet may get your tongue in a twist, all three are completely different things. A palate is another word for the roof of your mouth, while a palette is a wooden board that artists use to hold and mix their paint.

But why is a wooden platform for transporting goods called a pallet?

Well, the etymology of the word isn't exactly clear, but there may actually be a link between the pallet and the French word "palette", but sadly, there is no definite answer.

How many types of pallets are there?

There is, in fact, more than one type of pallet. They may seem like a bunch of wood nailed together, but they can come in many types depending on the purpose. 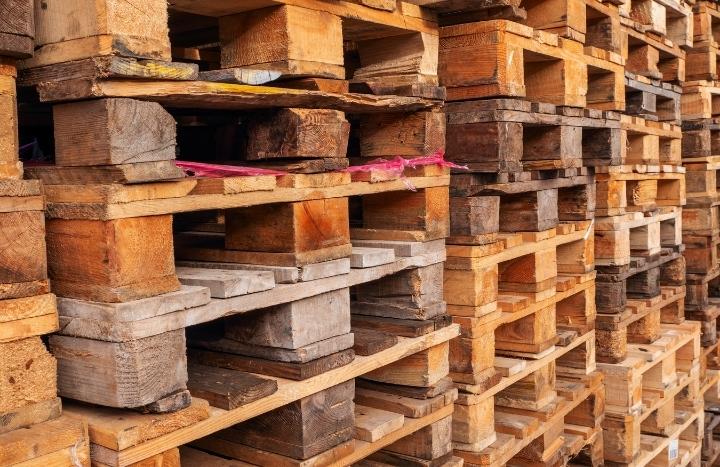 Here are the five main types of pallets you may come across:

Wow... that’s a lot of pallet types! Which one will you choose?

What came first, the pallet or the forklift?

Considering the original "skid" was altered and turned into a pallet to be used with forklifts, it's safe to say the forklift came first, all the way back in 1917!

The gaps around a pallet are designed to accommodate forklift forks so that they can safely and securely be moved around.

The skid was not designed for a forklift, as they were not invented at the time. Some types of pallets may limit forklift access, such as stringer pallets.

For example, if you're shipping to an Amazon fulfilment centre using PalletOnline, you need to make sure not to use a stringer pallet, as all four sides need to be accessible!

When was the pallet jack invented?

Hold up... if a pallet was designed to be moved by a forklift, what is a pallet jack used for?

Due to a skid being a more permanent platform for storage rather than transport, pallet jacks weren't originally designed to move a skid from one place to another. They were designed to  only lift it a few inches from the ground. 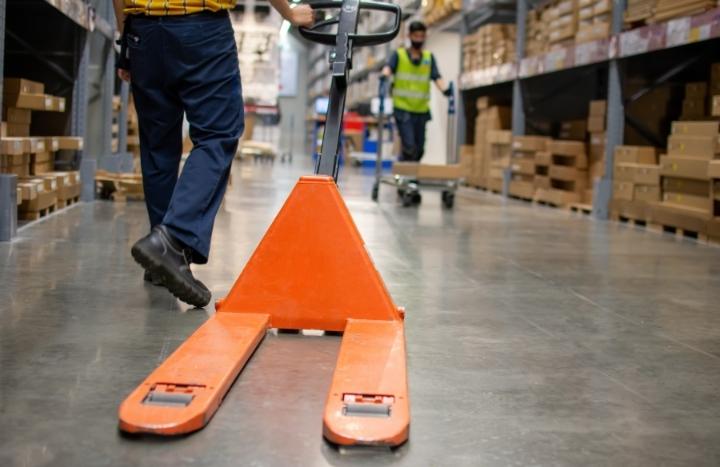 With the invention of forklifts and pallets, the "pallet jack" now had a better use.

Modern-day pallet jacks are either electrically powered to aid in heavy movement or manually lifted by pumping the handle.

Nowadays, a pallet jack is used to transport pallets from one place to another, usually only by a short distance, though.

They can be useful when loading goods onto a trailer, as they are a lot more compact than a forklift and can easily fit on the back of a tail-lift fixture.

Well, there you have it! Did you know about the history of a pallet? Or have you learned a few things?

A life without pallets would certainly be dull, dark and dreary, so why not put them to good use? PalletOnline will offer you a free, no-obligation pallet delivery quote to anywhere within the UK and Europe!