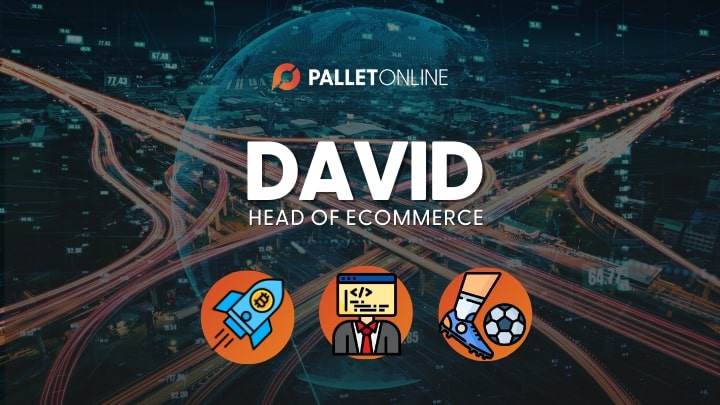 Here at PalletOnline, our staff are really what makes us special. We've collated a bunch of staff profiles so you can see who's really behind the scenes at PalletOnline!

Our first profile is dedicated to one of the most important people in the company, our Head of Ecommerce, David!

Let's start by getting to know David!

David, could you tell us a bit about yourself and your role here?

Hello, I'm David, Head of Ecommerce here at PalletOnline. My role is to oversee the direction of PalletOnline. It is my responsibility to ensure we are exceeding targets. I've had my hands on each part of PalletOnline since joining in 2018. I have overseen its growth in recent times, but the groundwork was really done before my arrival. I have been gifted with rock-solid service foundations and industry insight to build from. We have gone from strong market competitors into now an online leader and pioneer for our industry.

What is the best thing about working at PalletOnline?

The best thing about working at PalletOnline is seeing the five-star reviews come in. It means we're doing exactly what we said we would do when we sold the service and that in itself will help grow the business. The MD here is very open-minded and forward-thinking which has made my work simple to drive everything forward. He and the rest of the team have decades of industry experience so that in turn lends itself to our ridiculously high service levels. The staff are also a lot of fun to work with, we really do work as a single team throughout the business.

Love to hear that!

We thought we'd have a bit of fun and ask David 10 quickfire questions!

When you’re not working, how do you like to spend your time?

I'm very busy at home. I try to keep up with the latest online trends, I probably use my phone a little too much to stay up with things. I have a three-year-old who keeps me on my toes. We also have our second child on the way, due in June 2022. Aside from being a dad, I'm a season ticket holder at my beloved Stoke City. Hopefully, we'll be back in the Premier League soon.

I also enjoy playing football for a veterans team (over 35s) and going for 5k runs. I actually never did any running until the lockdowns, now it's part of my weekly routine. Although, I do have to go out at 6am these days as I need to be back to get my son prepared for school before coming into work.

What was your favourite subject in school?

IT, for certain. I used to be fascinated with how fast the IT teachers could type. I think I can out-type them for pace now, but it was something that amazed me as a child. I used to actually produce work for some of the naughty kids I was friends with at the back of the class. I was much faster than everyone else in our IT class. I actually enjoyed doing the work and they didn't mind letting me do the extra bits.

Thinking back, I probably should have charged them for the work!

Have you heard of that new band "1023 Megabytes"? They're pretty good, but they don't have a gig just yet.

I was always a winter guy until we had kids. I used to call winter time 'web developer weather'. I was originally a web designer and developer and it was great to sit inside working on code while the weather outside was so cold and rainy. Now I'm a dad I much prefer the summer, getting outside to play with my son and going on little adventures with my family has converted me.

Bring on the sun, not too hot though please, I'm very pale-skinned. I actually got second-degree burns in Dubai one time, but that's another story.

I like all the desserts! I really have to stop myself. If I had to pick something it would be between a cheesecake or ice cream. I'd probably put them both together and call that a single dessert though! If I'm in a restaurant; I'm ordering the cheesecake without a doubt. If it comes with ice cream, even better.

My favourite TV show of all time is The Sopranos. It's a slow burner to begin with, but it was outstanding TV at the time for me. I also loved Star Trek Voyager and Deep Space Nine growing up.

I've recently gotten into the new Star Wars TV shows. The Mandalorian and now the Book of Boba Fett have been fantastic watching, they really got me back into Star Wars. You can't go wrong with Match of the Day, although I tend to fall asleep these days and not make it through to the end of the day's highlights.

Where do you think PalletOnline is heading in the next 5 years?

We have new offices being built right now alongside our parent company, they are huge! I don't want to give away the game plan, but there is no limit to the potential of PalletOnline. We've grown so much since I arrived in 2018, our team has expanded 10 fold and we've got some really great people working here that brings its own rewards and improvements. Our recruitment is heavily focused on the potential and personality a person can bring in-house.

We're always looking at new areas to expand our services as we continue to push to be an industry leader and pioneer. Our focus will remain bringing good people in and offering best-in-class customer service. Although we have to be competitive, we don't try to be the cheapest service, we would rather be the best experience service. Customer retention has been a key part of our success and we will continue this as our journey pushes onwards and upwards.

If you could trade lives with anyone for a day who would it be and why?

It would have to be Elon Musk. I've always liked the idea of electric cars, I'm on my second one already. I think being energy efficient through sustainable options is certainly needed and something we will be looking at more and more here at PalletOnline. I'd also love to have a close up of the new Space X rockets, I don't think I could fit all of the stuff Elon does into a single day.

If your plane was about to crash, who would you want sitting next to you?

Not anyone from my friends or family, that's for sure. I would probably take a survival expert like Bear Grylls or someone of a similar skill set on the off chance that we survive the plane crash. We certainly wouldn't get much talking in while we were crashing.

Medium rare for me, please. This is the optimal level for best taste for me. It needs some good seasoning too.

Who is your favourite artist at the minute?

Are we talking music or NFTs? That's digital art if you don't know - NFT stands for Non-Fungible Token. My music taste changes all the time for artists, but its always Hip Hop based. I recently found a rapper named Tobe Nwigwe who has a great music video with his wife called 'Fye Fye'. I thought it was really interesting that his sister produced the beat and his wife rapped with him. My sister also works here, so I do like mixing family and work like these guys when possible. He has another song called 'Juice' with Paul Wall that I was into, its a little different and probably out there for most people's taste, but I'm into it.

Thanks for your time David. Our very first staff profile!

Many thanks to David for his time and we can't wait to introduce our next member of the team!

David has arranged a discount for anyone who made it this far down the page. Click the link to get 5% off your next booking with us.