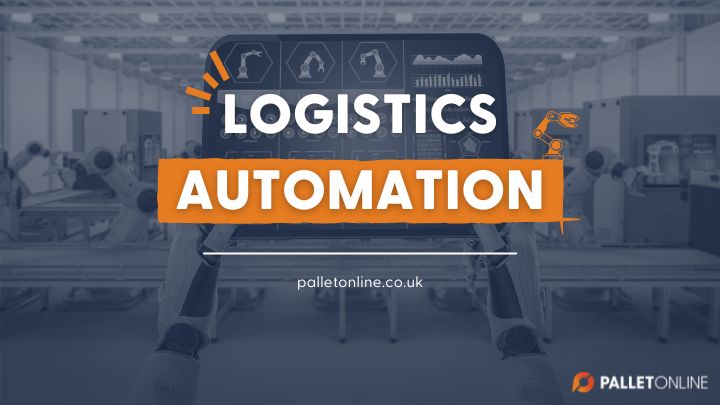 When it comes to pallet couriers and other logistical companies, it's safe to say that their jobs are becoming much harder to accomplish as businesses, online stores and large-scale distributors are surfacing.

All couriers are now having to come up with new ways of gathering the data they need for successful deliveries and better decision making altogether, for that matter.

Certain companies have implemented data visualisation and big-data algorithms to obtain the data and achieve what we mentioned before.

However, it is believed that a logistics automation revolution and artificial intelligence must be used to enhance several aspects of the information analysis process.

What is automation? Well, it's the use or introduction of automatic equipment in both manufacturing and other processes and facilities. More importantly, automation is inevitable. This is the way forward for many industries, not just logistics.

As every company out there strives to improve their efficiency and slash labour costs as much as possible, they likely will rely on the automation of logistics sooner or later. Automation is the key to reducing operation costs, however, there are risks involved just as there are with workers.

Of course, this means that businesses will need to better prepare for an automation revolution as many jobs are expected to be cut and workers replaced by machines that do the same job but cost less money. This is the way forward, not just for businesses but for entire industries, particularly logistics and has already proven its many benefits.

One good example of this is the continuous development of self-driven vehicles and logistics automation for warehouse operations. However, this means that operators will be susceptible to job displacement or pay cuts. Regardless, truck drivers will always be needed as the truck is not and will never be capable of loading and unloading pallets.

However, one thing remains the same: there is no better solution to managing and preventing risks in logistics than actual physical beings. As silly as that may sound, people have more potential to recognise risks and prevent them from causing problems further down the line.

While machines may eventually take over the more manual jobs, it will never be plausible to fully depend on automation. It's crucial to have some workers around while machines are operating as they can spot faults and act on them before they cause problems and cost money.

In the case of regular freight logistics, it is a known fact that data required for successful delivery is often trapped within various partners.

This builds up exceptions raised that classic logistics cannot handle or manage, for that matter.

This is mainly because the ways through which we manage data at the moment are not capable of that.

On the other hand, Artificial Intelligence is exactly what it says on the tin: intelligent.

AI can make sense of data better than physical beings (it's designed and manufactured that way), thus allowing people to be more strategic when it comes to managing exceptions.

For example, a large supplier that makes use of automated software, or Artificial Intelligence as we know it, to manage their internal and external data will always know where certain goods are coming from and if they arrive at the correct destination on time.

Moreover, Artificial Intelligence would be able to procure a certain delivery process with the proper kind of freight carrier and assess any of the possible risks regarding the time it takes a shipment to reach its destination, as well as its general condition.

Out with the old and in with the new, as they say! Millions of warehouses around the world are resorting to a pay-per-use basis for their warehouse services and storage space. All the consumer has to do is simply find the right website and request a quote for such services, then wait for their response - nowadays warehouses love keeping workers on their toes!

This particular, on-demand method of warehousing allows people and businesses more flexibility and choice when it comes to picking the best location, cost and supplier.

Such people are always looking for ideal alternatives to owning their very own warehouse, or urgently need storage space for already-loaded pallets. Others are even known to rent warehouse space when in the process of moving premises - the on-demand lingo works a treat for everyone!

However, every positive usually comes with a small downfall and in this case, the downfall when taking on the on-demand warehousing offer is exposure to fluctuating market rates for space. This can very often be overpriced in locations with ports, airports, railways, major roads and urban centres nearby.

Just like hundreds of other industries, cloud storage is revolutionary when it comes to the productivity of warehousing. The self-updating systems significantly cut maintenance, foundation and labour costs involved with the conservation of management systems.

Also, such cloud technologies are extremely user-friendly and can be practised by all workers, leaving businesses less exposed if their most skilled tech workers ever resign.

Essentially, AGVs are different from robots in many ways but the most obvious is that instead of operating more autonomously, they follow specific guided routes around warehouses.

One massive advantage of Automated Guided Vehicles is that they can easily replace forklift trucks and take away the hassle of having to physically move pallets around a warehouse. While AGVs are moving the goods around, workers could be using their efforts elsewhere on more important tasks - keeping an eye on the AGVs, too of course.

Plus, Automated Guided Vehicles are carefully crafted and engineered to halt to a safe stop if they run into trouble, i.e. if a worker runs into their path unexpectedly. This effectively increases efficiency as they can run constantly without taking breaks - they don't become as easily tired as we humans do!

Because of their many, many advantages, they are expected to become widely used in even the smallest distribution centres across the globe.

While batteries may not seem all that important when talking of warehouses, they more or less power the machines required to keep warehouses operating smoothly. Without good batteries, warehouses would be pretty pointless as nothing would get done on time (or at all!).

But how could the latest innovations in battery technology possibly improve warehousing, you ask? Well, it's simple.

Advancements in lithium-ion power cells have made impressive battery lives that can last up to 10 years before they need to be replaced. A good example is Tesla; their latest batteries focus on cheaper, alternative power sources that use solar energy and power from local energy grids.

So, just think of how powerful, productive and affordable robots, electric forklifts and other warehousing machines could be if they were to use these more advanced battery technologies.

Also, the heating and cooling of each warehouse space can eat up large amounts of energy. In this case, using better batteries to power the air-conditioning systems could also result in huge savings!

It's happening and it's happening pretty quickly, too! Small, manoeuvrable drones are finally starting to appear in warehouses around the world as businesses seek to automate inventory and asset management.

In warehouses, stock can be stored as high up as the ceilings (as high as 12 metres) and can only be accessed by ladders and forklift machines. All this manual labour has proven to be a bit of a pain for warehouse workers, and thus, they are bringing in the drones!

Now, scanner-carrying drones can fly high up and navigate warehouse shelves and take an automatic registry of stock - updating stock levels has never been easier and workers can focus their energy elsewhere.

Essentially, barcodes can be read and identified through cameras from a distance of 10 metres! Still needed, though, are advancements that allow several drones to navigate tight spaces without colliding.

Without a doubt, robots are game-changing for many industries. Such robots are programmed to guide their way around, picking and packing orders into carts or trucks.

A handful of warehouses throughout the country have already made the switch to full automation through the use of robots, while others remain cautious and are steadily easing themselves into the change.

One of the UK's biggest warehouses, Ocado, uses thousands of robots to rapidly (and safely) pack groceries into individual boxes for their millions of new and returning customers.

These robots function using complex algorithms, teaching them where to pick up inventory and guide them to where that exact item needs to be dropped. Meanwhile, this algorithm prevents every robot from colliding with one another on their way around the warehouse.

At PalletOnline, we are partnered closely with Palletline; all jobs they undertake include automated logistics to some extent. Palletline jobs that involve automated logistics are expected to drive the company to the forefront of the palletised distribution industry. With that in mind, we will continue to work alongside Palletline for many years to come.

Aside from Palletline jobs in automated logistics, we have even more examples of automation in the revolution of logistics! For example, IBM has connected cognitive computing capability with weather information from all around the globe.

Then, the AI was able to predict exactly when a hurricane would hit near one of their manufacturing sites, located in Mexico. The result? The company was able to make informed decisions, plan and avoid forking out unnecessary costs to replace equipment and such.

Furthermore, due to their effective decisions, they were also able to avoid delaying the shipment of their products, thus keeping their customers completely satisfied and business running as normal.

The revolution of logistics will be incorporated with automation in every aspect sooner or later. Given the need for efficiency and reduced labour costs, logistics automation and advanced technology are only natural when it comes to improving business and overall profitability.

For more information regarding arranging a pallet delivery, please do not hesitate to get in touch. Either give us a call or send a message using our Live Chat service and we will get back to you as soon as possible.

Alternatively, you can find more expert advice and top tips by heading over to our Help Centre!

First, select a pallet spacious enough for your goods without overhanging on any of the edges. Then, stack your boxes in size order (the heaviest comfortably at the bottom) and secure them to the pallet. Finally, attach a label before sending it to its destination.

A pallet freight is a load of goods secured to a pallet and wrapped prior to delivery via your chosen pallet courier. Your pallet freight may be secured to a standard wood or moulded wood pallet, but there are other options to choose from depending on the courier.

Each courier will usually collect goods from their customers and identify any pallets for delivery outside of their area. Every pallet is scanned and shipped directly to a courier hub. At the hub, all pallets are quality checked, scanned, unloaded and sorted into areas for delivery.

There are two suggested methods used to secure a pallet: strapping and shrink wrapping. When you strap items to your pallet, you should use at least two straps and make sure they loop through the forks of your pallet. You also need to tighten the straps into place for the most security.

A pallet is a small and portable platform on which goods are placed for shipments or storage. These help to better protect your goods throughout their journey with your chosen pallet courier.